While psychometric instruments provide a comprehensive evaluation of candidates` cognitive ability and personality, behavioural event interviewing (an advanced form of structured interviewing) gathers evidence of past behaviour against a well defined competency framework; which provides a highly reliable indication of likely future performance in the role (provided that role and work environment is going to be largely stable in the future).

Behavioural Event Interviewing (BEI) has been shown to have approximately 50% more predictive validity than traditional interviewing (the estimate varies from study to study owing to multiple factors), and research suggests it is especially effective when evaluating candidates for senior roles. This method is used to capture evidence of individual performance against a framework of behaviours (i.e. Competency Framework) required to succeed in a dynamic and challenging role (e.g. LRC`s framework for excellence in managerial roles).

Contrary to traditional interviews, BEI is a dynamic form of interviewing. The interviewee is guided to tell about the successful and unsuccessful outcomes in recent business roles whilst the interviewer skilfully probes and clarifies exactly how success was achieved. Because the interviewee is recalling their actual behaviours, accurate recall is enhanced and even the most nervous interviewees are given the best chance to accurately portray evidence of their strengths and weaknesses. It is this dynamic style, which differentiates behavioural event interviewing from more traditional, (often stilted) structured or critical incidence interviewing. The experience is more pleasant for the Interviewee and more profitable for the interviewer in terms of gaining an accurate picture. 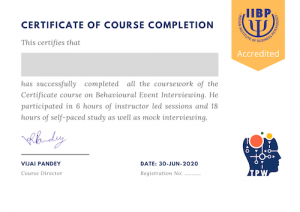 As noted, research shows that the best evidence of future performance is found in evidence of the behavioral competencies that the interviewee has displayed in the past. Accordingly, during this type of selection interview, the role of the interviewer is to collate as much evidence as possible of where the candidate demonstrates they have used the correct competencies, at the correct level for the intended role. This interview process places emphasis on the interviewing skills of the interviewer to collate detailed evidence during an interview and therefore, as for other forms of structured interviewing, consistency in the application of this process is extremely important and is best achieved by formally training interviewers in the technique.

By end of this course, participants will be able to...

Registration from for the certificate course in Behavioural Event Interviewing

This is a fully online course conducted over virtual workshops (via Zoom or Google Meet) and supported by e-learning course companion where participants can access the recording of the workshop and supplementary materials.

Behavioral Event Interviewing (BEI) is a technique that asks the candidate to describe a situation or an experience they had in the recent past. Responses may not be as polished as the traditional type of question because they cannot be rehearsed ahead of time. Nonetheless, the interviewer gathers valuable information from experiential responses because past behaviour predicts future behaviour.

Behavioral competency assessment is an integral part of the performance management process in high performing organizations.

This training uses proven method to learn and master the skill of Behavioural Event Interviewing i.e. learning by doing. You learn by conducting mock interviews under the guidance of an expert facilitator. The facilitators in this course have been in the interview panels of many medium and large organisations and have conducted hundreds of interviews. Major benefits of this course are:

A. Reduced time to hire and greater accuracy of assessing behavioural competencies.

B. Reduced attrition due to increased person-job and person-organisation fit

The course has an accompanying e-learning course hosted on https://learn.iibp.org.in where you can access the recording of the workshops and supplementary learning materials. This access is available to you for 1 full year from the date of the first workshop.